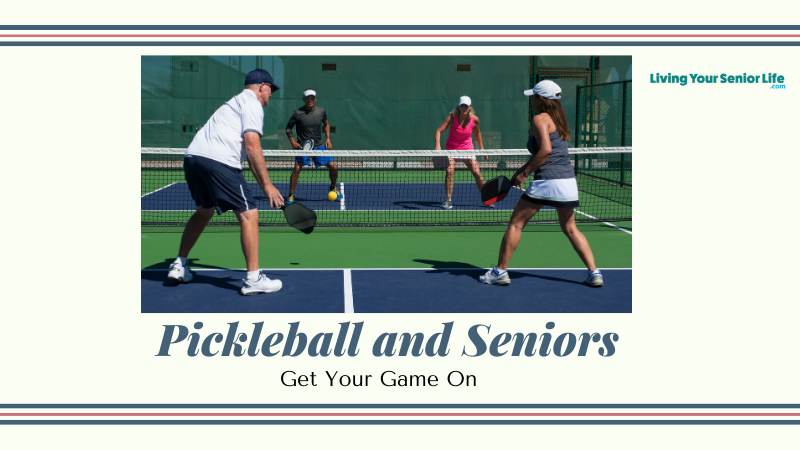 I recently came upon the sport of Pickleball while talking to a neighbor of mine. Before then, for some reason, I thought it was a card game. I had a vague memory of hearing the name once or twice before but had no idea what this new sport was. As I did more research, I found the popularity of Pickleball is increasing among all ages. So no matter what your age, to learn more about this sport continue reading, Pickleball and Seniors – Get Your Game On. Yay, one more social activity for all ages and fitness levels.

The History of Pickleball – What were you doing in 1965?

During my Pickleball research, I also discovered it’s not a new game, it’s not a card game, and has nothing to do with pickles, well, the edible kind, anyway.

When I said I thought Pickleball was new, I had no idea it had been around so long.  I was shocked to find out it was invented back in 1965 on Bainbridge Island – off the coast of Seattle, Washington.

The story goes that three fathers, Congressmen Joel Pritchard, William Bell, and Barney McCallum, got tired of their kids saying they were bored (anyone heard that before), so they wanted to create a game that would keep the kids occupied.

How Did Pickleball Get Its Name?

Two stories have circulated about how the name came to be – both coming from the families that created Pickleball.

The first story is about Joel’s wife, Joan, a competitive rower in college. Joan came up with the name Pickleball because it reminded her of a pickle boat. Say what? What the heck is a pickle boat? After some research, I found that people would refer to the weaker, mismatched crew boat teams as pickle boats.

The second story is that Joel’s daughter got a puppy from a neighbor. They named this little guy Pickles. Well, as the story goes, when Pickleball was being played, Pickles loved to get the ball and run away with it. Thus, the game was named after Pickles, the dog.

Which story is right? Well, the puppy story has been discredited because, though there was a family dog named Pickles, he didn’t arrive on the scene until a couple of years after the creation of Pickleball. Thus, Pickles was named after the game, not vice versa. As an animal lover, I like the puppy story better, but oh well.

What Is Pickleball? – Say What? Pickle Who?

The net is lowered on the court, much as you see in tennis. A plastic ball with holes (similar to a Wiffle ball) larger than a tennis ball is the object to hit. A paddle is used to lob the ball over the net, back and forth, much like you see in ping pong or tennis.

Most of the time, you will see Pickleball being played as a doubles game (two people on each side or team), but it can also be played as singles.

The ball must bounce twice (once on each side) before it can be volleyed (no bounce).

The players are not allowed to step in the kitchen zone (which encompasses the 7 feet in front of the net on each side) unless the ball bounces first.

Points are scored by the serving side only when the opposing team faults – either the ball bounces twice, goes out of bounds, fails to be returned, or hits the net.

The server continues to serve, alternating between the right and left side of the court until the serving team faults in the same way – either with the ball bouncing twice, going out of bounds, hitting the net, or failing to return.

More in-depth Pickleball rules can be found on the USA Pickleball Association website.

There are specifications for paddles and balls, so if you are playing in a league or tournaments, you want to be sure your equipment meets those specifications.

Other than that, you’ll need proper attire being; athletic court shoes, shorts, skirts or pants, a top, and perhaps a visor or eyewear – yep, that’s it.

A word about court shoes – it is said you don’t want to wear running shoes because they don’t provide the support needed with side-to-side running.

Many groups that play Pickleball will have a ball that can be shared, but most want you to have your own paddle.

For Price and Reviews

Though many people think that pickleball is only played by those individuals over the age of 55 that isn’t true anymore.

So no matter what age, this sport could be the one for you

This is especially true after you get more practice and play a more rigorous game.

In a research study performed by Western State Colorado University in 2018 it was found that playing pickleball three times a week could improve cardiovascular fitness as well as blood pressure.

You also want to be cleared by your doctor before playing to be sure there isn’t a reason for you not to.

If you have any injury at all, have it looked at by a doctor to find what treatment is needed.

Where to Play Pickleball

Finding A Pickleball Court Near You

As the sport’s popularity surges, adding pickleball facilities could be a competitive advantage for senior living communities.

But for now, with pickleball becoming such a popular sport, it is played in every state, and it isn’t hard to find a court. On the USPA website, there is a search function to find facilities that provide Pickleball courts for you.

I searched the app “Meet-Up,” and there are locations listed there where you can meet up and join a group that plays Pickleball.

As you become more experienced, there are Pickleball tournaments, and some states have Pickleball in their senior Olympics.

There are also Pickleball camps you can attend to learn or better your game.

With Pickleball increasing in popularity, some cruises offer the activity as well – this might be the perfect reason I need to book a cruise.

At the time of this article, Holland America had 14 ships that showed Pickleball as an activity. Princess and Regent Seven Seas are also adding Pickleball.

It has been reported that some cruise lines will allow you to bring your own equipment on board and use their tennis, volleyball, and basketball courts for Pickleball.

It’s always good to check if you want Pickleball as an activity on your cruise – you don’t want to be disappointed if they don’t.

Where To Find Pickleball Equipment and Accessories

Amazon.com has a complete line of Pickleball sets and individual products such as racquets, balls, nets, shoes, and accessories. You can also check for Pickleball products at your local sporting goods stores.

Best Exercise Equipment for Seniors – Are You Pumped?

Types of Cardio For Seniors – Getting Fit In The Golden Years

How To Exercise With Lower Back Pain – Oh My Aching Back

According to the USA Pickleball Association, there are nearly 3.1 million people that play pickleball in the United States, and pickleball’s popularity is only growing.

Not only is Pickleball a great activity to get some much-needed exercise, but it’s also a great social outlet that can help alleviate social isolation as well. Yes, Pickleball and seniors go hand-in-hand, and I don’t believe the pickleball craze will go away anytime soon.

After researching and talking with people who play Pickleball, I’m in. Are you? I may not be the best player, but it sounds like a lot of fun. Yes, Pickleball and Seniors – Get Your Game On.

Do you have any Pickleball stories?  I would love to hear about them.  Also, if you have any questions, please feel free to ask in the comment section below.

5 thoughts on “Pickleball and Seniors – Get Your Game On”