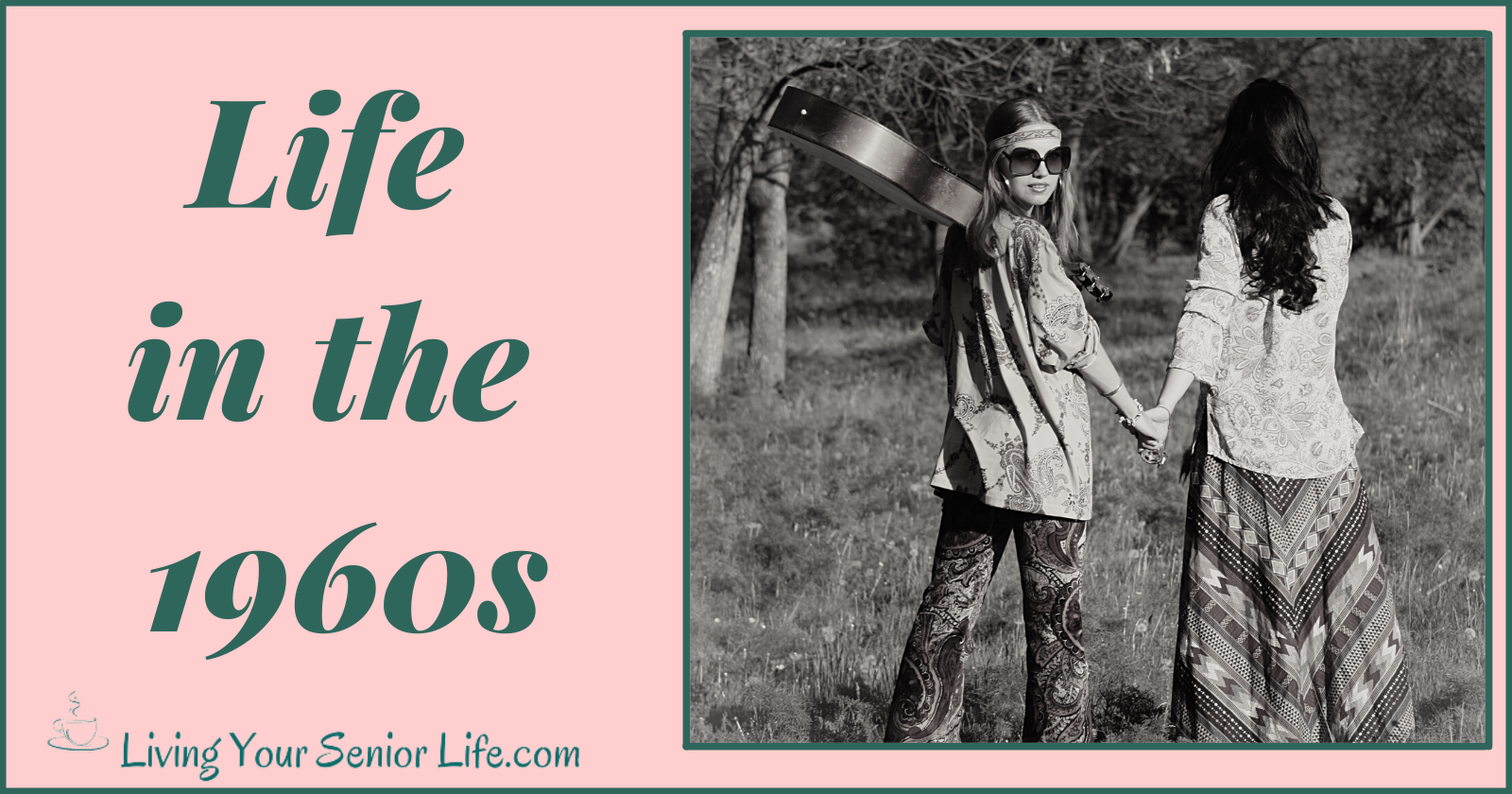 Whether you experienced the 1960s or are just curious, Life in the 1960s – A Trip Down Memory Lane will give you insight into some of the events, fads, and lifestyles that mark that decade.

The decade of the 60s saw much turmoil, socially, politically, and culturally. Some might argue that the 60s saw more change and unrest than any other decade.

In 1961 there were approximately 700 American military advisors in South Vietnam. They were sent there to contain gorilla or communist activity that number grew to over 12,000 in a little over a year. By 1963 this number grew even more to 16,000. Technically The United States never declared war on Vietnam. However, in 1964 the Gulf of Tonkin Resolution by the United States Congress authorized the escalation and use of military force in Vietnam. With the escalation of military force and the implementation of the military draft, by 1966, the number of troops soared to 500,000.

In April of 1961, there was a failed attempt by the United States and its allies to remove Fidel Castro from power in Cuba. A few years earlier, Fidel Castro had led an invasion into Havana, Cuba. The result was that he was responsible for overthrowing the American-backed president, General Fulgencio Batista.

With the American trained Cubans that had fled their homes when Castro took over, the United States launched an invasion to take power away from Castro. What happened was they were severely outnumbered by Castro’s troops and surrendered within 24 hours.

The United States blockaded the island to prevent further deliveries of nuclear missile heads by the Soviet Union.

The Berlin Wall was a physical and psychological barrier that divided East and West Berlin during the Cold War.

It was erected in 1961 as part of the division of Germany following World War II.

The Soviet Union built the wall in 1961 as part of its strategy to restrict movement between East and West Germany as well as an effective way to prevent refugees from entering the former Soviet Union.

A couple of decades later, on November 19, 1989, people protesting against communism gathered behind it to lay flowers at its foot before climbing over or breaking through it. This event signified the beginning of the end of Communist rule in Europe and is considered one of history’s most significant moments.

John F. Kennedy was the 35th President of the United States, was assassinated while riding in a motorcade in a convertible in Dallas, Texas. It is thought that Lee Harvey Oswald was the gunman. Though Oswald was apprehended, he was killed on November 24 by Jack Ruby. Ruby gave the reason for the killing as an outrage against Oswald’s assassination of Kennedy. A jury found Ruby guilty of murder, but Ruby died from lung cancer while awaiting a new trial in 1967.

Martin Luther King was a Baptist Minister who was a prominent figure in the civil rights movement of the 1960s. In contrast to Malcolm X, King’s speeches advocated equality but through peaceful protests. One of his well-known speeches was “I Have A Dream,” given on August 28, 1963. At the age of 35, he was the youngest person to receive the Nobel Peace Prize. He was assassinated on April 4, 1968, in Memphis, Tennessee, by James Earl Ray. In 1969 Ray pleaded guilty to murder and was sentenced to 99 years in prison. Over the years, Ray tried to recant his confession but failed and died in prison in 1998.

Robert F. Kennedy, brother of John F. Kennedy, was U.S. attorney general and adviser during his brother’s presidency. During this time, Robert Kennedy fought organized crime and worked for civil rights for African Americans. One prominent action he took was sending thousands of troops to Oxford, Mississippi, to enforce the Supreme Court order to admit James Meredith (the first black student) to the University of Mississippi.

Working alongside his older brother and later President Lyndon B. Johnson, he was instrumental in the development of the Civil Rights Act of 1964. This Act outlawed racial discrimination in voting, employment, and public facilities.

From this many different segments of society, discriminated against because of their gender, race, sexual orientation, or socioeconomic status, found a voice to protest their unfair treatment, often modeling their struggle with African Americans’ successful civil rights movement.

Robert F. Kennedy became a U.S. senator from New York in 1965. During the time of his being a Senator, he was an advocate of the poor and racial minorities. He also opposed the escalation of the Vietnam War. While campaigning for the Democratic Party’s presidential nomination, Robert F. Kennedy was assassinated in Los Angeles on April 4, 1968. The assassin was a Palestinian immigrant, Sirhan Bishara Sirhan.

Sirhan Sirhan was convicted in 1969 of murder and sentenced to death. In 1972, The California Supreme Court outlawed capital punishment, and Sirhan Sirhan’s sentence was commuted to life in prison.

The counterculture of the 1960s was an emerging schism between the conservatism of the older generation and the emerging liberal thoughts of the younger generation. This dichotomy sparked a social revolution. Not only with the conservative values coming into question, but the invasion of Vietnam became a breeding ground for protests.

Young people who were part of the counterculture were known as “hippies.” The quest for a moral liberal culture included:

Drug use became more prevalent, especially marijuana and psychedelic drugs such as LSD.

Two of the most well-known counterculture events were the Summer of Love, which took place in San Francisco in 1967, and the Woodstock Festival in upstate New York in 1969.

The Summer of Love occurred when approximately 100,000 primarily young people converged on San Francisco’s Haight Ashbury neighborhood. The sentiment was one of music, hallucinogenic drugs, anti-war, and free love.

Woodstock was a music festival promoted as three days of peace and music. It was held in upstate New York on a dairy farm owned by Max Yasgur. Over 400,000 people attended, with 32 bands performing. Woodstock was a reasonably peaceful event. There were two fatalities – one person died from insulin usage, and the other was run over by a tractor in a hayfield. Drug overdoses over the three days numbered 742.

The women’s movement in the 1960s was a time of significant change and progress for women. Although there had been previous movements like the suffrage movement, the 1960s saw a more widespread effort to combat discrimination and inequality against women.

The feminist revolution began with landmark cases such as Roe v. Wade, which legalized abortion in America. It ended harsh criminal penalties for Eve Cleary, who became known as “the first woman on death row.”

Other events tied to the women’s movement include; Title IX, which requires equal access to education programs by men and women at U.S colleges; passage of laws protecting working mothers, including maternity leave legislation in California; establishment of rape crisis centers around the United States; amendment of employment law outlawing sexual harassment in workplaces across all industries finally giving employees recourse against such behavior.

The space race between the United States and the Soviet Union was going full force in the 1960s.
Among other successes, the Soviet Union sent the first man to space in April of 1961. In 1965 the Soviets launched Luna 10 which orbited the moon.

The tide started to turn in the mid-1960s, with the United States becoming dominant in space exploration. However, that dominance was met with tragedy when Astronauts Virgil Grissom, Edward White, and Roger Chaffee lost their lives on the launch pad when a fire swept through the command module of Apollo 1. This put a temporary hold on the space program for the United States.

In 1969 Apollo 11 was launched into space. On July 20, 1969, the United States landed Apollo 11 on the moon. This landing made history with the first man taking steps on the moon. Mission Commander Neil Armstrong, Command Module Pilot Michael Collins, and the Lunar Module Pilot Buzz Aldrin made this historic mission. The famous words heard throughout the world, “That’s one small step for (a) man. One giant leap for mankind.” are forever etched in our minds.

Some Scientific Events of the 1960s

With the 1960s, there came an onslaught of new-style automobiles in the United States. The big three automakers, Ford, General Motors, and Chrysler, dominated the industry in the United States, making up 93% of the cars produced and 48% worldwide. From luxury cars to economy cars to muscle cars, there was one that appealed to just about everyone.

Because there are so many popular cars from the 1960s, I’m keeping the list to 3 per year.

In the earlier years of the 1960s, conservative clothing was still being worn. The pillbox hat and skirt suits that Jacqueline Kennedy wore and brought to popularity abounded with women. But as the decade went on, nothing screams the 1960s like the mini-skirt, go-go-boots, tie-die shirts, headbands, peace sign medallions, and hippie beads.

In contrast to the 1950s, the 1960s saw women’s hair get shorter and men’s hair longer. However, the traditional styles were still donned by both. And with hippie hair, both genders coiffed long hair.

Popular Hairstyles of the 1960s

We can’t leave the 1960s hairstyles without mentioning Hippie Hair. The Hippie movement of the 60s was one of nonconformity, and one way to do that was through the expression of their hair. Usually just worn straight down and one length, and many times this was paired with a headband.

Popular Movies of the 1960s

Popular Artists and Groups of the 1960s

With the British Invasion of music the Beatles and the Rolling Stones were two of the most renowned bands of the decade, and their impact can still be heard today across the globe.

With the changing environment in the 1960s, along came some fun trends.

One of the most famous slogans of the 1960s, Flower Power, symbolized nonviolence and harmony, especially in regards to the opposition of the Vietnam War. Flowers abounded and were worn in the hair, painted in graffiti, found in fashion, and used elsewhere.

Found in homes across America, Lava Lamps were created in the 1960s as a tabletop decorative. Not a lamp in the generic term that gives off light but consists of a wax mixture set in liquid. As the wax warms, it rises to the top and then loses its buoyancy as it cools and returns to the bottom of the lamp.

Two peace symbols were prominent in the 1960s. The first represented disarmament of the late 1950s. It consists of a circle with a line from top to bottom and two shorter diagonal lines. The second peace sign was made with the hand. The index and middle fingers while the other two fingers and thumb are clenched. Though both can take on different meanings in the 1960s, they were displayed as a symbol of nonviolence and peaceful harmony.

A prevalent fashion trend of the 1960s. Tie-dying is a process in which fabric is folded or twisted and bound with rubber bands and then followed by applying dye(s).

The 1960s had kids playing board games that lasted through the decades and can still be found today. Most toys were still gender divided – boys playing with GI Joes and girls hoping to receive a Chatty Cathy or Easy-Bake Oven for the holidays.

Popular Board Games of the 1960s

In looking back at Life In The 1960s – A Trip Down Memory Lane, I hope you were able to revisit some fond life events. If you didn’t live during that time, my hope is you were able to learn something new about the decade.