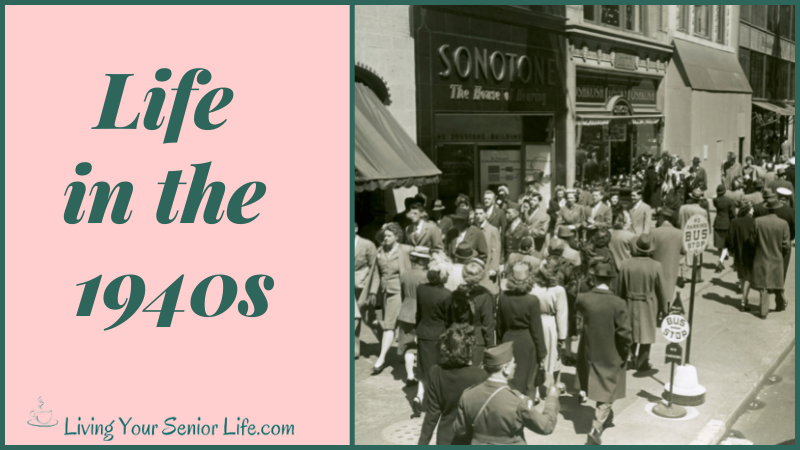 Whether you experienced the 1940s or are just curious, Life in the 1940s – A Trip Down Memory Lane will give you insight into some of the events, fads, and lifestyles that mark that decade.

For the first part of the 1940s decade, much of the world was immersed in war. In 1939-1941 Nazi Germany invaded Poland, Denmark, Norway, Benelux, and the French Third Republic. This began what we now know as World War II.

The United States entered WW II after the Japanese attack on Pearl Harbor. This was a surprise military assault on the United States naval base at Pearl Harbor, Hawaii, by the Imperial Japanese Navy on December 7, 1941. The objective of the raid was to destroy American military forces. The attack destroyed more than two-thirds of the U.S. Pacific Fleet and brought America into World War II.

The Holocaust, where the mass genocide of the European Jews by Nazi Germany and its collaborators, took place between 1941 and 1945. It has been estimated that between 11 million and 17 million people were Holocaust victims.

The United States Army Air Forces sent support for Poles on September 18, 1944, when a flight of 110 B-17s of the 3 division Eighth Air Force airdropped supply for soldiers.

The Western Allied forces landed on the beaches of Normandy in France on June 6, 1944.

With men having entered the military to fight for the country, women were now needed to take the place of these men in the workplace. Nearly 19 million women in the United States held jobs. An iconic figure for these women is known as Rosie the Riveter.

Germany surrendered in May 1945 with the German Instrument of Surrender, which ended the war in Europe.

The United States detonates the first ever use of nuclear bomb over the Japanese cities of Hiroshima and Nagasaki on August 6 and 9. Japan surrendered on August 15, 1945.

After WW II ended in 1945, The United Nations was formed with a vision to maintain international peace and security. The United Nations Charter was signed on June 26, 1945, by the representatives of 50 countries and took effect on October 24, 1945.

Another important organization that came into being at this time is the North Atlantic Alliance. There are 28 European countries and 2 North American countries that are a part of the Alliance. A treaty, NATO (North Atlantic Treaty Organization), was developed. The purpose of NATO is for the members to agree to mutual defense in response to an attack by any external party. The treaty became official on April 4, 1949.

The Soviet Union and the United States competed for supremacy in what is known as the Cold War, which lasted decades. It began in 1946 after World War II ended and lasted until 1991, when Russia dissolved into 15 republics. Economic warfare was the primary mode of warfare during the Cold War, with each side trying to outdo the other with its own goods and services.

President Franklin Roosevelt was the 32nd President of the United States. He led America during some of its most difficult times and is often considered one of the greatest presidents in American history.

During his time as president, FDR created many programs that are still in use today, including Social Security, The Wagner Act (which helped usher in an era of unionization), and New Deal initiatives like The Works Progress Administration (WPA) and the Civilian Conservation Corps (CCC).

In addition, he led America into World War II by issuing Executive Order 9066, which allowed for the internment of over 100 thousand Japanese Americans on US soil.

President Roosevelt was elected to an unprecedented fourth term.

He passed away a few weeks later due to complications from polio.

Though the Jeep made its debut on November 11, 1940, it was during this time that the automobile industry came to a standstill. Production lines were shut down, and the government managed all existing unsold cars to aid in the war effort. These unsold autos were leftover from 1941 and 1942 and rationed out as needed for civilian and military use.

Production of automobiles resumed in 1946.

A notable mention during this decade was NASCAR® holding its first modified stock car race in Daytona Beach, FL, FL, in 1948.

Due to the rationing of fabric, dresses became shorter than those seen in the previous decade. Mid-calf dresses were no longer the fashion trend as the knee-length dress came into style.

There were a variety of neckline styles of the 1940s dress. These included square, keyhole, wrap, sweetheart, and button-down tops. The design of the everyday dress was modest.

One-piece bathing suits were still prevalent in the 1940s, but the two-piece and bikini became more popular.

In the early years of the decade, women’s hair was somewhat short, with tight ring curls around the face. By 1943 hair was usually worn shoulder-length with curls and volume. Hair was set in pin curls overnight and brushed out in the morning. A popular hairstyle had hair half up and half down.

In the early to mid-1940s, men’s hair was short on the sides and back and longer on top. Hair was parted on the side or smoothed back. As the later years of the decade came, men’s hairstyles gained more height and more waves.

In taking a look at Life In The 1940s – A Trip Down Memory Lane, I hope you were able to revisit some fond life events. If you hadn’t lived during that decade, my hope is you were able to learn something new about the decade.