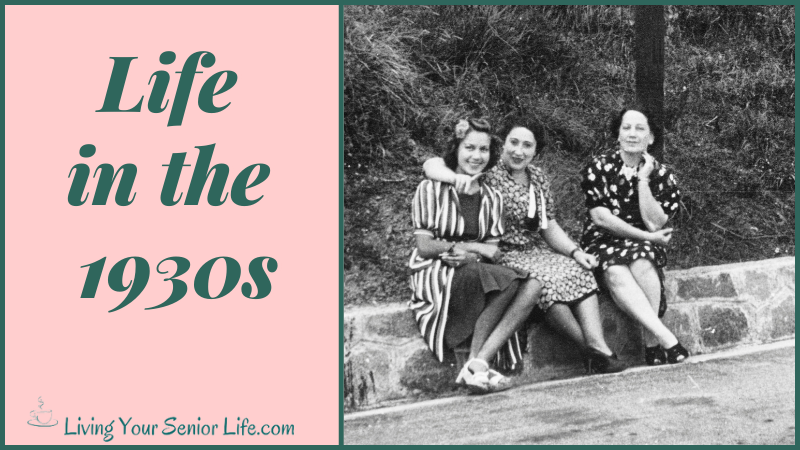 Whether you experienced the 1930s or are just curious, Life in the 1930s – A Trip Down Memory Lane will give you insight into some of the events, fads, and lifestyles that mark that decade.

The decade of the 1930s was filled with much despair and economic turmoil. Unemployment and poverty were rampant throughout the United States. The Stock Market Crash of 1929 was followed by The Great Depression lasting through much of the 1930s.

The Dust Bowl led to an agricultural crisis across the plains (mainly Oklahoma, Arkansas, Missouri, Iowa, Nebraska, Kansas, Texas, Colorado, and New Mexico). Many families were forced to leave their farms to look for other employment. However, the Great Depression made it even more challenging to find work that would sustain families. With the Dust Bowl, the decade became known as the “Dirty Thirties.”

The decade ended with the beginning of World War II.

President Franklin D. Roosevelt would become the only president in American history to be elected to four terms in a row, entering office in early 1933. The Great Depression of the 1930s and World War II would be two of the country’s greatest challenges, and President Roosevelt would lead through them.

It was during the 1930s that radios and heaters became common in automobiles. Automatic transmissions were also introduced during this time.

In the 1930s, with the economic hardships being experienced, the clothing industry changed. Garments were now being made in factories being mass produced compared to the made-to-order fashion of earlier times.

Women’s fashion in dresses changed from the boyish fit of the 1920s to the soft, feminine silhouette of the 1930s. There became a more tailored, modest style of dress while accentuating the female curves. The natural waistline, skirts flaring slightly, fitted hips, and high neckline were the fashion statement of the decade.

For both men and women, hats were a definite fashion accessory of the 1930s.

In the 1930s, women went to a more feminine hairstyle than in the previous decade of the 20s. For women, the most popular hairstyles were that of finger waves and pin curls parted both in the center and side.

Hollywood stars such as Carey Grant, Jimmy Stewart, and Clark Gable heavily influenced hair cuts for men. It was the norm for men to have short hair around the ear that tapered down to nothing at the nape.

The Jazz style of music popular in the 1920s evolved into two popular music genres of the 1930s – Swing music and Big Band. The silky-voiced crooner singers remained popular throughout the decade.

Many classic movies came out of the 1930s. The Drive-In Movie was introduced in 1933 by Richard Hollingshed, making it easier for families to watch the newest releases.

For the first time, citizens did not have to wait until the evening paper to get the latest news — radios brought breaking news right into people’s living rooms. The airwaves carried talk about jobs and the economy during the Great Depression, but Americans also heard the news about incredible advances in science and technology, celebrities of aviation exploration, and political changes afoot in Europe.

Many of the games we love and play today originated in the 1930s.

Swallowing goldfish became a college phenomenon in 1939. The fad is thought to have begun as a $10 bet at Harvard University as part of a bid for a freshman running for class president. It then went on to become a competition between various universities.

In taking a look at Life In The 1930s – A Trip Down Memory Lane, I hope you were able to revisit some fond life events. If you hadn’t lived during that decade, my hope if you were able to learn something new about the decade.