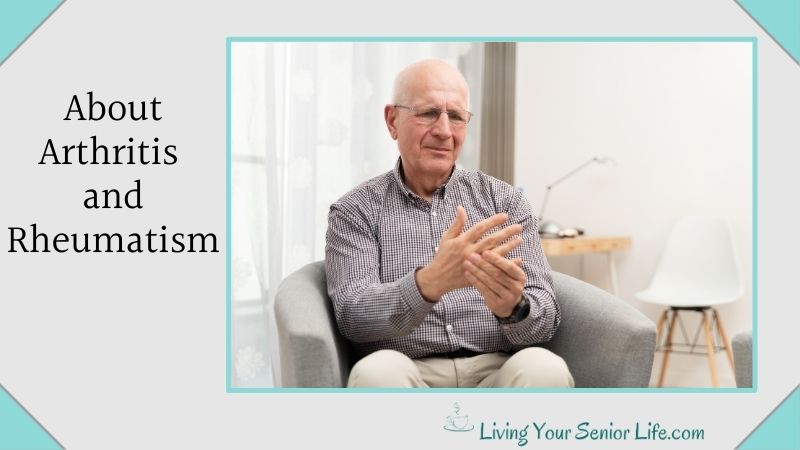 This article is for information purposes only and should not be used as an alternative to medical advice or seeing your doctor.

Arthritis occurs when the body experiences inflammation in one or more of the joints. This inflamation causes pain, stiffness and also can limit the range of motion. All these symptoms can worsen as part of the aging process.

Arthritis doesn’t discriminate and can affect men and women, children, all races, all ages. According to one study, more than 50 million adults and 300,000 children have arthritis. It is found more often in women and is seen more often as we age.

The pain that is experienced can range from mild to chronic and may subside only to come back.

What Is Rheumatoid Arthritis?

When a joint is afflicted with Rheumatism, it usually appears symmetrically on both sides of the body. For instance, if a joint in the hand has rheumatism, it is likely that the other hand will as well.

If you have the following symptoms, they may be due to Rheumatoid Arthritis (RA):

It is thought that Rheumatism is caused by a combination of environmental and genetic factors, as was studied by Smolen, J. S., Aletaha, D., and McInnes, I. B at the University of Glasgow in 2016.

A family history of rheumatoid arthritis increases the chance of experiencing it 3-5 times more than someone who does not have that genetic history.

Diagnosing Rheumatoid Arthritis usually begins with describing your symptoms to your doctor. It can be challenging to diagnose in the early stages because your symptoms may mimic those of other diseases such as lupus or fibromyalgia.

At your appointment, your doctor will probably ask you some questions such as: when did you first start to experience your symptoms; do your symptoms usually appear after you have been active or after rest; rating the level of pain – mild, severe, chronic; do the symptoms come and go or are they constant; and what have you tried to alleviate the pain.

Your doctor will more than likely perform a visual exam of the joints, causing the pain. He will feel for warmth, swelling, any redness that may be present.

To further his/her evaluation, you might be sent for blood work to check for levels of inflammation.

Orders may be made for imaging such as x-ray to see if there are signs of osteopenia, swelling of the soft tissue, and a decrease in joint space. An MRI or ultrasound may also be administered to track the progression and to see the current severity of the disease.

Unfortunately, at this time, there is no cure for Rheumatoid Arthritis. There are, however, some treatments that can help manage, slow down the progression, and lessen the pain.

Because of the progressiveness of the disease, the earlier the treatment is started, the better.

Some treatments to consider are medication, lifestyle changes, alternative medicine, physiotherapy, and surgery.

The most common of these drugs used and many times the first in treatment is Methotrexate. Methotrexate can also be used with other anti-rheumatic drugs to increase remission rates.

After six months, 21% more people had an improvement in their symptoms using a combination of rituximab and methotrexate than those that didn’t.

NSAIDs have been found to reduce both pain and stiffness in those suffering from RA. However, because they do not affect the underlying disease, they are usually not the first choice. Also, those with gastrointestinal, cardiovascular, or kidney-related issues should use caution with taking NSAIDs. Stomach irritation, heart problems, and kidney damage are possible side effects of NSAIDs

Examples of NSAID drugs include:

Non-NSAID drugs to relieve pain, like paracetamol, may help reduce the pain; however, like NSAIDs, they do not change the underlying disease.

Applying heat and cold may help in relieving the soreness of muscles and reducing inflammation.

Electrical stimulation, the elicitation of muscle contraction using electric impulses, can also be used in conjunction with physical therapy.

A TENS unit is a small device that sends electrical signals into your body through electrodes placed on your skin near the area that hurts. Though some people find relief with Electrical stimulation, it is usually short-lived.

Though there isn’t a particular diet for those dealing with rheumatoid arthritis, there are foods with an anti-inflammatory effect.

Some of these anti-inflammatory foods include:

Supplements are in abundance, so it’s important to talk with your health care provider before adding supplements to your routine. Some supplements can interact with other medications, so it’s best to err on the safe side.  But what are some supplements that are said to help with inflammation?

You’ll want to start with gentle exercise that does not lead to more inflammation. As always, before beginning any exercise program, consult with your doctor.

I wrote an article, 3 Best Gloves For Arthritis in Hands – where I compare four different gloves used to alleviate arthritis pain and discomfort.

There are many arthritis support groups where you can interact with others that have rheumatoid arthritis.  Sometimes it can be so beneficial to have contact with others who are going through the same issues you are.  To find a support group by you, go to www.arthritis.org and look for a local group.  They also have an online community that many find helpful.

The more information you gather about arthritis and rheumatism, the more knowledge you will have to handle this disease in your life successfully.  With an understanding of the symptoms you are experiencing, you can better address those symptoms individually. You might find one treatment is better than others for you, and that is okay. Something that may work for someone in your support group might not be something that works for you.

I hope in reading, About Arthritis and Rheumatism, some of your questions have been answered. What’s important is that you discuss your symptoms with your doctor and make a treatment plan that is beneficial to you.

Have you experienced arthritis or any treatments; do you have any questions or comments?  Please comment below – I would love to hear from you.

In-Home Safety for the Elderly